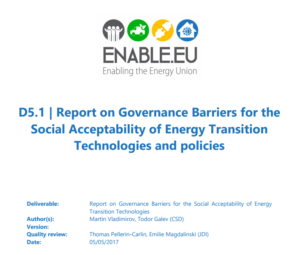 Two new deliverables have been published on the ENABLE.EU website.

Deliverable 2.2, a literature review that sets the scene for the project, looks at research on drivers of energy choices, pointing out to their contribution as well as their limits. Analysing over 400 academic articles, this review testifies to the abundance of explanatory elements and findings through various disciplines. This literature review is structured in four parts: a first focusing on economic drivers of energy choices, a second looking at socio-behavioural drivers, a third analysing governance factors, and a fourth part taking stock of the overarching models of energy choices as well as highlighting the interactions between the factors studied in the literature.

Deliverable 5.1, a report on governance barriers for the social acceptability of energy transition technologies and policies, has concluded that there are common obstacles faced by diverse stakeholders, participating in and creating the governance of energy transition. The establishment of open institutions, involving both the public and the private sector and the public in the design and implementation process, could mitigate the barriers and risk of failure. In addition, better communication at the European level and vertical integrated governance processes between EU and national level, which take into consideration the countries’ specificities, seem to have an important role for further regulation adoption on national level.