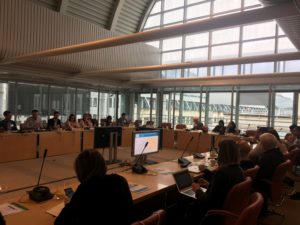 How can we create a roadmap towards a more sustainable future, one that is both inclusive and effective? And what kinds of changes, that is, what kinds of regulations, subsidies, and other initiatives, need to be implemented at the national and EU level to allow citizens to drive this transition?

These were the questions at the heart of ENABLE.EU’s third transition workshop, the Responsible Energy Practice Workshop, held on 15 March 2019 at the EESC in Brussels, Belgium. Bringing together experts and citizens, the event featured a series of interactive sessions where participants debated issues related to energy consumption, prosumption (energy generated at home, with the excess sold back to the grid), and sustainable mobility.

Opening remarks were given by Pierre-Jean Coulon, President of the section of the EESC in charge of Transport, Energy, Infrastucture and Information Society (TEN), who emphasized the importance of financing projects like ENABLE.EU, that put the citizen at the heart of the energy transition. Covering 11 European countries, ENABLE.EU is representative of Europe’s diversity and resonates with the EESC’s work, which aims at representing European civil society. Noting that he was happy to cooperate further with ENABLE.EU partners, Pierre-Jean Coulon nicely synthesized what participatory foresight attempts to do by stating that “the European energy transition must be done by the citizens, for the citizens and with the citizens”.

Following this introduction, Carlo Sessa of ISINNOVA presented the objectives of participatory foresight, explaining that this third and last stage of the transition workshop process was aimed at identifying promising sustainable energy practices that can be replicated across Europe. 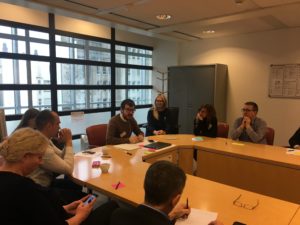 So, what were the conclusions? For energy consumption, education and awareness are key, both to understand how consumption plays into reducing (or aggravating) our footprint, and to understand how much we are really consuming. One suggestion that kept coming up repeatedly was to include real-time information on appliances and meters, so that people can understand how much energy they are consuming with every choice they make. The gradual introduction of new building standards could also make a big difference.

For prosumption, several financial incentives and other initiatives were suggested. Some of these included things like feed-in tariffs and carbon pricing, though it was pointed out that these sorts of policies might not do enough to reduce energy poverty. One thing that could address energy poverty in certain communities – while introducing more sustainable behaviours – could be public-private investments in solar power. A more equitable distribution of energy could also take place via community networks and renewable energy cooperatives. But to form new networks and business models, legal barriers need to be removed. As with energy consumption, there is also a need for reliable, detailed information on what technologies are best. 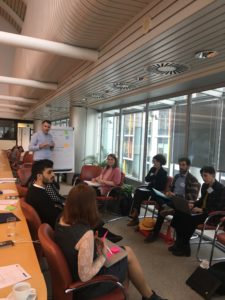 For sustainable mobility, it is essential to change people’s mindsets, which can be done by raising awareness but also by changing urban planning to facilitate more eco-friendly forms of transport. Breaking the dependence on private cars could be achieved by building infrastructure that can make it easier or more appealing to take public transport or bikes. To disincentivise the use of fossil fuels, two suggestions were made: to install charging stations every 50 km on highways by 2020, and to have CO2 taxes for those vehicles that pollute the most, such as airplanes and big trucks. Another change that could bring about a big reduction in emissions, as well as rejuvenate local farming, is to produce most food within 50 km by 2030.

But what is going to be done with all of these recommendations? Are citizens really going to have their voices heard?

That was the question on everyone’s mind at the closing of the workshop, when Thomas Carlin-Pellerin of the Jacques Delors Institute talked about the next step in the process: communicating the project’s recommendations to policy makers in Brussels. For the first time, the European Commission has set a clear end goal to the energy transition, which is to achieve net zero greenhouse gas emissions by 2050. Moreover, on May 26, Europeans will elect new members of parliament, who will elect the new president of the European Commission, who together will co-design the new work programme of the European Commission. The work of the project now is to take stock of the policy proposals that have come out of the workshops, to refine them as needed, and to propose them to the new members of parliament. These citizen co-designed proposals, such as educating children on energy behaviours, having a platform that can provide reliable information on what you can do to consume less, and having a charging station every 50 km on all European highways, are concrete recommendations that the project’s representatives will bring to policy makers this fall.

More about the transition workshops