Reproduced with permission from CICERO. Click here for the original article. 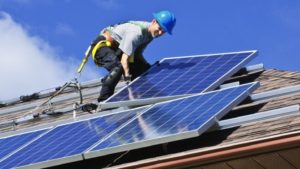 In EU climate policy a strong emphasis has been put on consumers. It is believed that measures that empower consumers to make ‘smart’ and ‘green’ energy choices is essential for moving towards an energy future with less use of fossil fuels. One group of consumers is especially interesting in this regard, namely the prosumer.

Prosumers are citizens who consume electricity as well as produce electricity on their property, mainly by installing solar PV panels on their rooftops. Prosumers also sell the excess renewable electricity produced back to the transmission grid and therefore are part of energy mix in their local environment.

Despite the benefits of prosuming – both for the households that lower their energy bills and locally/nationally by increasing the share of renewable energy – there is the potential to increase the share of prosumers in the European region. To achieve this, we need more knowledge concerning the motives and experiences of today’s prosumers to find out what are the enablers and barriers to making these energy choices.

Prosumers are citizens who consume electricity as well as produce electricity on their property, mainly by installing solar PV panels on their rooftops.

Together with several research partners, CICERO has been part of a study on prosumers in Norway, Italy, Serbia, the UK and Ukraine. Prosumers are people who have invested in household solar power plants and sell the excess produced. This study has put particular emphasis on the social and cultural factors behind the decision to become prosumers, with a special focus on gender relations. What we wanted to find out was:

To find the answers to these questions we did a media analysis and conducted in-depth interviews with men and women in 66 households spread across the case-study countries.

Engineering for a new energy future or for the ‘smart’ man?

Several previous studies have found that the implementation of new energy technologies in households tends to be gendered. ‘Smart’ technologies tend to be designed for the ‘techno savvy man’ who is skilled and interested in trying out new technology. On the other hand, women do most of the energy-related domestic work in the household and incentives for reducing energy consumption may complicate these tasks.

We found similar tendencies in this case study. In all five countries it was almost exclusively men who drove the process to become prosumers – they put the subject on the agenda at home, contacted a solar company and straightened out the paperwork, etc. Of all those interviewed in the study, women drove the process only in three households and in these cases the women worked in the energy sector.

The tendency of men to be the first to want to try out this new technology was also reflected in how the prosumers interviewed interacted with the technology. We asked all the interviewed prosumers to note down the frequency of checking their electricity production (on the inverter, computer or apps) over a week. In general, men monitored electricity production and consumption more frequently than women. Several women stated that household energy and solar technology was ‘his thing’.

It was quite surprising to find such a clear pattern in all five countries.

We also asked all the prosumers interviewed to describe an ‘average prosumer’ in order to understand how they perceived prosumers. Most of the interviewees identified the average prosumer as a man with high to middle income, with environmental awareness and technical or economic interests. To a large extent, this is also how prosumers are portrayed in the media and advertisements.

The motives for becoming prosumers, however, varied according to the context of the different countries. In the UK, Italy and Ukraine, the prosumers were mostly motivated by the environmental and financial benefits of producing their own renewable energy. In these countries, feed-in tariffs have been put in place to make prosuming more attractive among citizens. In Serbia, the regulations make prosuming for private residents more or less impossible and the few that have invested in household solar systems have mainly done so because they live in or have a holiday house in an area that is not connected to the central grid supply.

In Norway, the prosumers are mostly motivated by environmental and technical interests as the up-front costs of such systems are still relatively high (despite national and some municipal subsidy schemes for their implementation costs). There were less gender differences in the motives to become prosumers, though only the three women working in the energy sector stated technological interest as a motive for the investment, while this was mentioned often by men.

Energy and gendered divisions of labour within the household

Though energy technology has a tendency to become a ‘male domain’, women actually perform most of the energy-related domestic work such as cooking and laundry. We asked all those interviewed in the study to make a note of who did what (cooking, laundry, showering) and the frequency within the household. Across all five countries women almost exclusively took responsibility for laundry. Women also did most of the cooking, but in some countries, men participated more in this task. We did not find any particular differences on the time and frequencies of showering.

How women and men divide energy-related domestic work is important knowledge when developing energy policies. It is beneficial for prosumers to shift the main bulk of energy consumption to the daytime when the sun is shining and several women checked the weather forecasts and changed the timing of laundry to the daytime. But this puts the responsibility for reducing electricity consumption on women and may have undesirable effects if doing energy-related domestic work is prioritized over income-generating activities.

Including a gender focus on a study on energy technology also sharpens the eye for inequality in general. It is interesting to note that all 66 households that participated in this study were detached or semi-detached houses owned by the residents. Most of those interviewed were also middle class or above in social status, and most had higher education. This tells us that in all likelihood those who have the financial means and knowledge can invest in technology that lowers their household energy costs, while those who are energy poor cannot.

Even in Europe, energy poverty is a problem as many families and individuals need to use a substantial part of their (low) income on household energy consumption to heat their houses and cook their meals. As certain groups, such as women, are overrepresented among those with lower income this problem has also gendered aspects. To build a ‘green’ energy future that is sustainable, energy policies need to take this into consideration.